What Every State in the U.S. Is Worst at

One thing that makes the U.S. great: no two states are the same. That diversity leads to distinct strengths and weaknesses, but how can you know what makes North Dakota different from South Dakota, besides a made-up line separating them?

Well, in the interest of showing that every state sucks in some way, we picked out one key area where each is most deficient. This is what every state is the worst at. 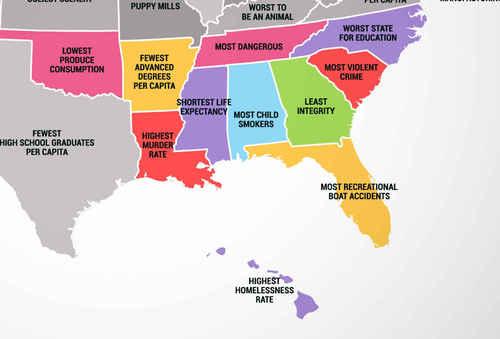 Alabama: Most child smokers
Alabama is one of the few states in the Union that has raised its smoking age to 19, but apparently this measure is improving health about as much as fast food restaurants listing how many calories are in a bacon double cheeseburger. Smokers gonna smoke.

All that oil money apparently leads to some bad decisions. But really, in the state with the lowest population density that’s also got the coldest average temperature, you can also just blame it on lonely Alaskans looking for another warm body.

Arizona: Worst at going to the dentist

Nearly 60% of people in Arizona say they don’t get regular dental exams. Which, if you’re retired and have dentures, probably makes sense. But still — gross.

Only 6.1% of people in Arkansas have an advanced degree or higher. You know your state is doing something wrong when West Virginia is calling “SCOREBOARD” about its academic prowess compared to yours.

Everybody already knows the air in Los Angeles feels like it was imported from a Mad Max movie. But, not surprisingly, the air also sucks in Bakersfield, Modesto, Sacramento, and Fresno. As if you needed another reason not to visit Fresno.

The next time you’re in Colorado, and somebody at a party is talking about fresh-cut powder, don’t assume the discussion is about skiing conditions.

Connecticut has a lot going for it, with the highest rate of school enrollment in the country and the highest per capita income. But the top 1% in Connecticut earn 41 times what everyone else earns. The rich get richer, and everybody just keeps trying to figure out what New Haven pizza is.

According to a Gallup poll, less than half of people from Delaware report exercising regularly — for 30 minutes a day, three times a week. According to Google Maps, it only takes about an hour to drive from the north end of Delaware to the south end, and surely very few Delawareans know how long it takes on foot.

Florida has the highest number of boat accidents and fatalities. Yet studies consistently show that Floridians operate boats at least as well as highly caffeinated orangutans.

Politicians in Georgia are the least ethical in the country, with an estimated 658 state workers having accepted gratuities during a two-year period. State legislators were not available for comment without an offer of basketball tickets or honey baked hams.

The good news is that homelessness has been decreasing in the United States in recent years. The bad news is that Hawaii still has about five times more homeless people than Mississippi, Indiana, and Kansas. At least they get to sleep on a beach?

Fortunately, drivers in Idaho do not cause the most road accidents, since few people live in Idaho or really need to drive through the state on their way somewhere else. The next-worst places in this survey were the District of Columbia and New York, which makes sense, given their reputations. Apparently, Idaho’s drivers are just total jerks behind the wheel.

That’s right, people in Illinois are harmed by things other than guns and deep-dish pizza. Having all those rail yards and being the heart of America ends up bringing a lot of derailments to your backyard, too. Illinois just barely edged out Texas in total train accidents. 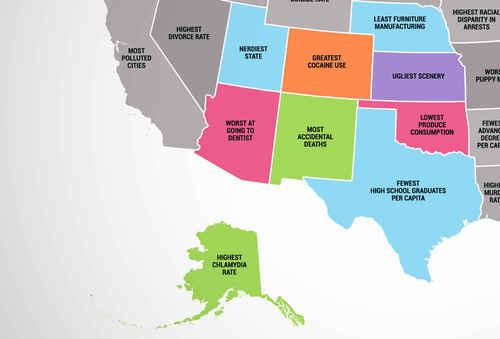 Huge upset here — who didn’t think this title would go to Florida?

Black and white Iowans use marijuana at about the same rate, yet black Iowans are eight times more likely to be arrested for marijuana possession. FYI: that’s a lot.

Have you ever wondered why The Wizard of Oz starts in black and white? Well, it turns out that Kansas actually looks like that. Or, at least, that’s what most of America thinks Kansas looks like.

Kentucky: Worst to be an animal

While the Kentucky Wildcats claim eight NCAA championships, being an actual wild cat there is no fun, seeing how Kentucky is on an unprecedented seven-year run as the worst state for animal protection.

Louisiana has both the highest murder rate and the highest rate of death by firearm, so think twice about where you’re stumbling around after a Mardi Gras night out. Otherwise, guys like Rust Cohle will be chain smoking in a storage unit a decade from now, wondering how you disappeared.

You might have to hop over to nearby New Hampshire in order to land that helicopter. Tough life, Mainers.

Maryland: Worst at incarcerating the elderly

In Maryland, old people can literally get away with murder. OK, so maybe not, but only 7.5% of all the state’s inmates are over the age of 50, which is about half the rate nationwide.

Massachusetts was the first state to ban happy hour in 1984. That means for 30 years, people have been complaining about their bosses after work over FULL-PRICED drinks.

8 Mile helped put Detroit back on the Hollywood map. Too bad every other mile in the state is as terrible as the Tigers in this year’s playoffs, since Michigan spends the least per capita on its roads and bridges, at $174 per person annually.

In 2010, Minnesota had 145 tornadoes, statewide. That number nearly equals the number of “Land of 10,000 Lakes” and Fargo references the average Minnesotan encounters from out-of-towners every year.

Related: Stay in a Lighthouse or Helicopter: The Coolest Hotel in Every State

If you live in Mississippi, you’re only going to live for 75 years, on average. There are 11 states in the Union in which residents are expected to live to at least 80 years old, a full five years more than Mississippians get. And they’re five extra years NOT spent in Mississippi.

Montana: Most traffic fatalities per capita

Back in the late 90s, Montana actually abolished speed limits during the day, so you could drive as fast as you wanted to get out of Montana. It was like the Autobahn, except in Montana and not Germany, although drivers were singing songs like “Barbie Girl” in both places. Some things just shouldn’t be emulated. Thankfully, Montana re-instituted speed limits, and Americans stopped liking Aqua.

If you’re looking for a coffee table slapped with a “Made in Nebraska” sticker on it, you’re gonna have a tough time finding it.

This is the least surprising statistic in the Union. Just think of all those Elvis-officiated ceremonies and booze-fueled nuptials between strangers, then thank God legal proceedings that happen in Vegas can also stay in Vegas. 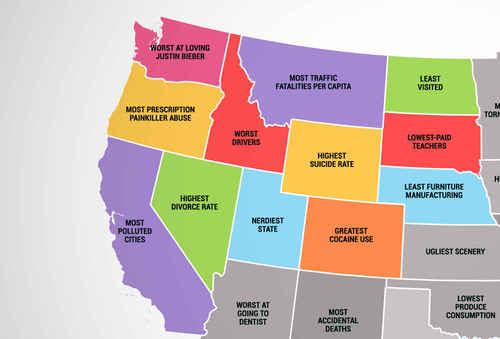 Apparently, there’s not a whole lot to complain about in New Hampshire. But if you’re trying to navigate the state via boat, you’re pretty much out of luck.

New Jersey has a speed trap every 30 miles, the most in the nation, and it collects $30,000 per mile in road user fees. But the real kicker: if you get caught doing even 10 mph over the limit, your fine can be doubled for “racing.” Turns out the real Jersey Turnpike is even more offensive than Deena’s dance on “Jersey Shore”.

And the award for most fatally careless goes to…New Mexico!

New York: Worst to be a taxpayer

New Yorkers pay the highest average state and local taxes, at a wallet-busting $9,718 per year; that’s 39% higher than the national median. Even when adjusted for cost of living, New York still comes in dead last.

North Carolina was determined to be the worst state for education based on a number of factors such as education spending, student-to-teacher ratio, and percentage of dumb kids.

Geography isn’t really helping North Dakota out, since it’s isolated from a lot of the country. But it’s not like South Dakota is somehow geographically sexier. The big difference: North Dakota doesn’t have a huge tourist attraction like Mt. Rushmore. You know, unless you consider the National Buffalo Museum a must-see.

Ohio came in dead last in a study of water cleanliness by the Natural Resources Defense Council. “There’s something in the water” might actually explain why Ohio’s professional sports teams never win anything.

While Oklahoma’s fast food titan, Sonic, offers 398,929 different drink combinations and sells roughly 3 billion Tater Tots a year, it doesn’t appear as if too many fruits and vegetables are making their way into those meals.

There are two rules to painkillers in Oregon: don’t touch their Percocets, and do you have any Percocets?

Of the 22,660 bridges in PA, 23% are considered “structurally deficient”. Crossing a bridge in Pennsylvania sounds like a good way to end up in The Mothman Prophecies 2: PA Boogaloo.

More than half of Rhode Island teachers had missed more than 10 days during the school year, and one in five had missed at least 20 days of school. If you did that as a student, you’d be held back. And to think, Rhode Island’s teachers still get paid more than teachers in South Dakota.

Of all 50 states, South Carolina has the highest rate of violent crime at 766 per 100,000 residents. So much for that whole concept of Southern hospitality. 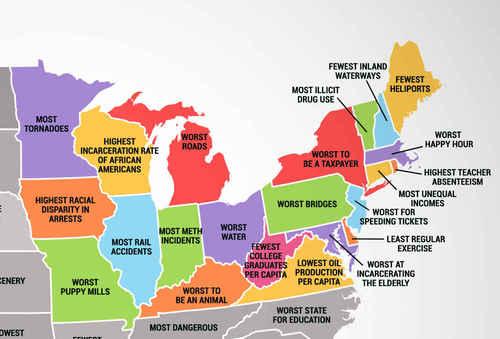 Not in the Michael Jackson Dangerous way. Just straight up “keep your head on a swivel” dangerous.

Less than 80% of Texans have a high school diploma. It’s actually the only state that dips below 80%, too. Everything is bigger in Texas — including dropout rates, apparently.

A study calculated the nerdiest state based on public Facebook likes. So maybe it’s more correct to say that Utah is the most openly nerdy state. Either way, it’s hard to argue against a state that sells only three-two beer and has last call at 1 a.m. being nerdy.

Vermont: Most illicit drug use

Vermont’s love for drugs can perhaps be linked to the fact that it is also the state with the fewest children, and now most of its residents have reached an age where they realize the incurable pain life has to offer. Either that, or they’re just really into partying.

Alaska, of course, ranks highest in this category. Fortunately for Virginia, it still gets bragging rights for being so much better at not having chlamydia.

Washington residents are not Beliebers. The state had by far the lowest per-capita Facebook likes for the pop star at 6.82%.

West Virginia is only “almost heaven” in John Denver lyrics — economically speaking, the state is kind of a black hole. In addition to the fewest college graduates, it also has thefewest full time workers, and the lowest level of optimism about the economy.

A shocking 12.8% of African American men are incarcerated in Wisconsin, nearly double the national average of 6.7%, and 3 percentage points worse than the next-worst state, Oklahoma. An African American man has a higher chance of being sent to jail in Wisconsin than from the B&O railroad in Monopoly.

Wyoming has the highest rate of suicides at 23.2 per 100,000. The state with the highest will to live is New Jersey, which has a suicide rate nearly three times lower than Wyoming’s. Thankfully, Wyoming is also the least populous state.